November was an extremely difficult month amid the dramatic collapse of Sam Bankman-Fried FTX and its multi-billion trading arm company Alameda. This will be remembered as one of the worst-ever episodes in the digital asset space. Similarities with the financial crisis of 2008 are everywhere, thousands of users lost all of their capital, many were institutional players who were investing their treasuries on FTX or its subsidiaries triggering additional collapses and bankruptcies over the whole space.

Blockfi, a US regulated digital asset company with more than 100k creditors and billions of dollars in assets-liabilities, filed for bankruptcy. Genesis from DCG group, another industry big hitter, is potentially following the same direction but for the moment being they are trying to recapitalize (raise funds) to fill their balance gaps. Remains to be seen if other players are affected and go out of business. Moving forward and despite the overwhelming challenges that cryptocurrencies will face, we believe that crypto will recover more strongly and the post winter period will come with huge opportunities for the ones who were able to survive. Needless to say, Teks Capital had NO exposure to FTX, Blockfi, Genesis or Gemini earning products.

Regarding digital asset price action, the month started with BTC trading at around 20.5k US$ but after November 9, when the FTX collapse was made public, BTC had a significant drop of almost -30%! A lot of FUD has been triggered through meme accounts who were betting an imminent collapse to the 12ks, but the market found support in the 15ks and recovered strongly with BTC in the high 16ks.

As an example of this rebound, short term IV closed at 53 from a peak of 150 three weeks before. After the FTX disaster, volumes and liquidity declined as expected given that the confidence has been severely damaged in the space.

The S&P ended +5.5% for the month and the Nasdaq performed +4.4%. This market comeback in the last few days was mainly due to comments made on Wednesday November 30th by Fed Chair Jerome Powell, stating that rate hikes will be lower (market is now expecting 50 bps in December and 25 bps in January). Needless to say, this 11th hour boost significantly impacted November returns overall.

US Bonds (safe haven) were up +5.6% while Gold price rallied ending the month +3.6% incentivized by a weaker US dollar.

The perception is that the worst has passed and that the Fed will slow the pace of the rate hikes soon (potentially in December or January). But it is important to note the aftermath of the FTX debacle. It remains to be seen if additional casualties appear.

During November, the Fund returned -3.1%.

As we have mentioned in our previous newsletters, we had been incrementing our long deltas during the beginning of the bear market which of course detracts our performance under such a stressful market condition. Ironically, what affected us most was the cash synthetic that we structured to minimize crypto ́s volatility. The FTX collapse sent futures to a brutal backwardation of more than -150% on the perpetuals with lowest points of almost -535%!

Again we are still expecting volatile months ahead but we are seeing decent support in the digital asset markets and would not be surprised if a rally occurs.

We are launching a new series of structured option products that optimize risk/rewards and are superior versions of our current models. We have already begun to execute the strategies both in digital and traditional markets given the granularity and liquidity that it offers. More news will be coming soon!

Performance is net of fees. Trading started on March 12, 2021. April to June preliminary results. The official NAV is calculated by the Administrator every Quarter. The next official NAV will be based on June 2022.

Benchmarks: BTC price index is conformed by the Bitstamp price of BTC at 18 CEST. 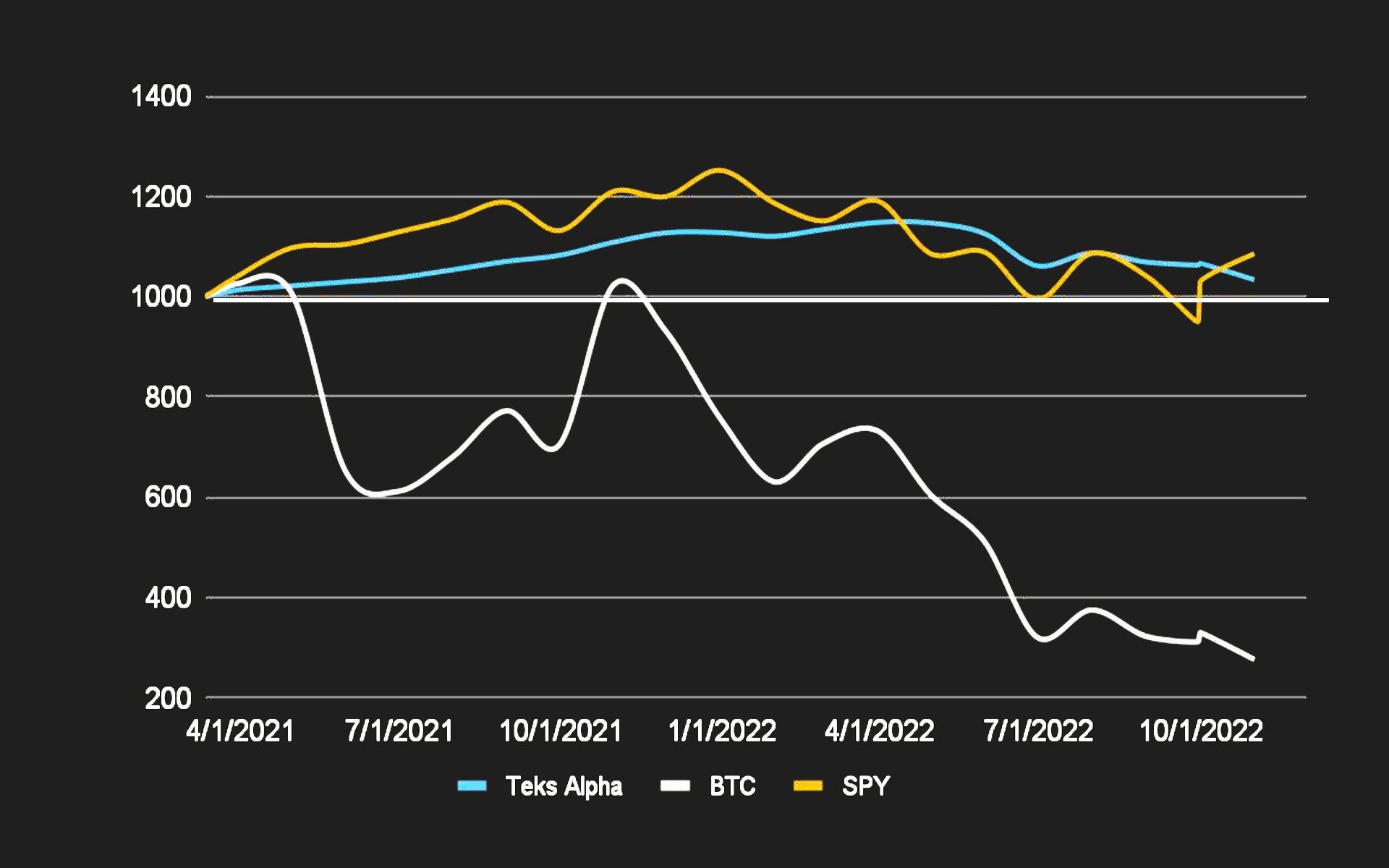